Up next on my favorite installment of Stuff We’ve Found are these beauties! Another glass bottle, a short rim cartridge, a frequent buyer punchcard from Romeiser’s, dominoes, and really, really old glass. Husband has been doing some rewiring work on our 2nd floor and to access some of those electrical lines, he’s been crawling in walls and prying up floorboards on the third floor. He’s started quite the little collection of items and I could not be more excited. Each piece just adds to the story.

I love to sit and imagine what happened on the days those items were placed there so long ago. Who thought to hide their glass bottle in the wall instead of burying it in the backyard? Who dropped their clothing punchcard between the floorboards and which curse word did they use when they realized it was gone “forever”? Was a child disappointed that they’d lost their dominoes? The endings to those stories are left to the imagination… but that’s my favorite part. 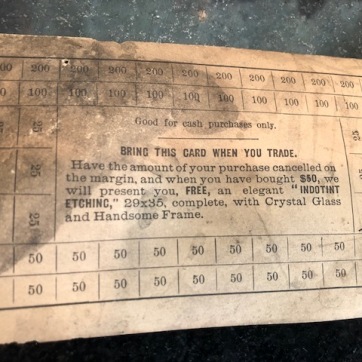 This Nehi soda glass bottle has a patent date on the bottom of March, 1925. It was bottled here in Belleville, IL. In 1924, the Chero-Cola company added Nehi to its roster of sodas, offering grape, orange, root beer, peach, and other flavors of soda. It was instantly successful (outselling the Chero-Cola name brand entirely), which caused the company to change its name to the Nehi Corporation in 1928. Sales boomed and, despite a dip in sales in 1931 due to the Great Depression, Nehi was widely a household name even through the 1940s.

When chero-cola was rebranded at Royal Crown cola, the company saw yet another name change to RC Cola, the same RC Cola we see in stores today. It’s likely that this bottle was enjoyed by someone who lived on our third floor during the time it was parcelled into wartime apartments. It’s in remarkable condition, without a single nick or chip. 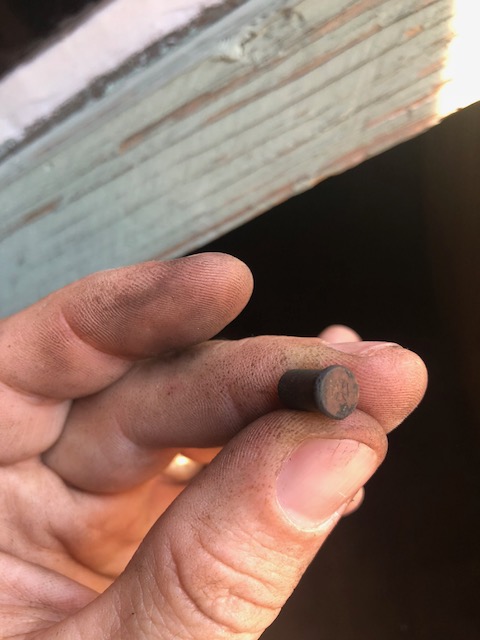 This rimfire cartridge seemed pretty mysterious at first because the headstamp on the end resembles the German Cross (which would have been a no-no after about WWI…) but through pretty deep digging, we were finally able to track its source. This is a .22 short rimfire cartridge from the Western Cartridge Company based out of East Alton, IL. They used the Maltese Cross as a headstamp, later using it as their company logo. It’s not uncommon for the German Cross to be confused with the Maltese Cross, which is why we were a little confused in the beginning. The Western Cartridge Company transitioned to using a diamond stamp and logo in 1910, so this cartridge likely predates that.

One of the more interesting finds were these two fully intact sheets of plate glass. The label indicates that they came from the Pittsburgh Plate Glass company in Creighton, PA, the first financially successful plate glass company in the country. Established in 1883, they would become the largest manufacturer of plate glass in the world. Plate glass is different than other glass in that it is poured and rolled into shape, instead of blown. Extensive grinding and polishing operations–reducing the plate to half its original thickness–made the product smooth and shiny, free of optical distortion (AKA: no more wavy glass).

There’s no real way of telling if this glass was using during construction of our house in 1887 (with these being leftovers just being left behind) or whether Peter Romeiser was interested in using Pittsburgh Plate Glass in the windows of The Romeiser Company and had these sent as samples. Regardless, the glass itself is in perfect condition. The paper logo is worn but it’s at least 130 years old– what do you expect?! 🙂

Today Husband bought a giant high-power magnet to help grab up any other metal items floating around in the places he crawls through. Hopefully this isn’t my last update on things we’ve found in walls!

I’ve been woefully inferior about maintaining any sort of regular posting schedule, which I absolutely apologize for! I’ll get right on fixing that. 😉

This morning, I want to share with you an incredible photo from the Romeiser Company during their heyday!

These beautiful street fairs were wildly popular… and honestly, not much has changed. There’s definitely this running “joke” about What’s Going on in Belleville this Weekend? Becuase there’s inevitably some sort of festival or fair or parade.

The Fall of 1906 was not a good year for the Romeisers as a family unit and I have no idea when this photo was taken… whether it was Spring or Summer or what. It’s somewhat chilling to see the year and think about everything they were going or would go through come November… 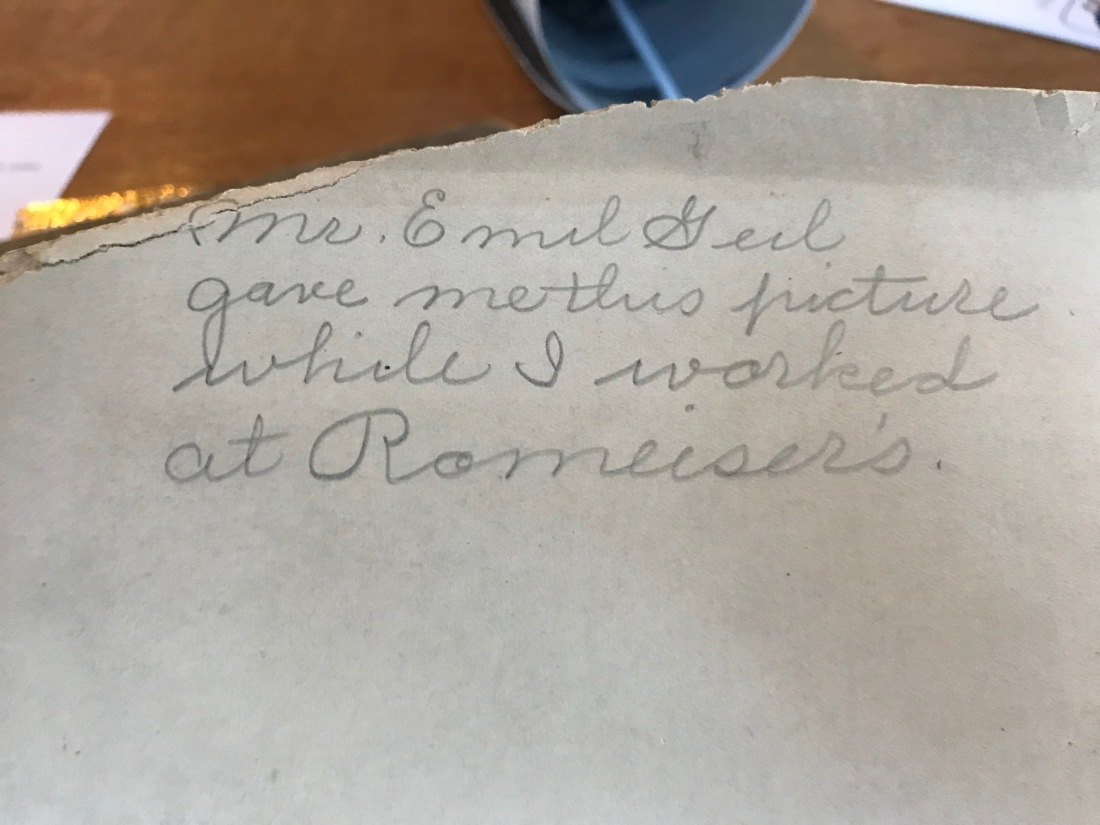 I would really love to track down the story of this photo. Emil Geil was Peter Romeiser’s business partner, trusted confidant, and friend. They worked together at the company, with Mr. Geil carrying on his duties after Peter’s death. That this photo came from an employee of The Romeiser Company feels super special and I’d love to know who it was.

This photo is right in line with the theme of the 2019 Belleville Historical Society’s annual calendar, “Shopping Small on Main Street.” Naturally The Romeiser Company is featured in the calendar. It’s really beautiful and I’m proud to be able to offer them for sale. They’re $10 and if you’re wanting a copy, email me via our contacts tab! 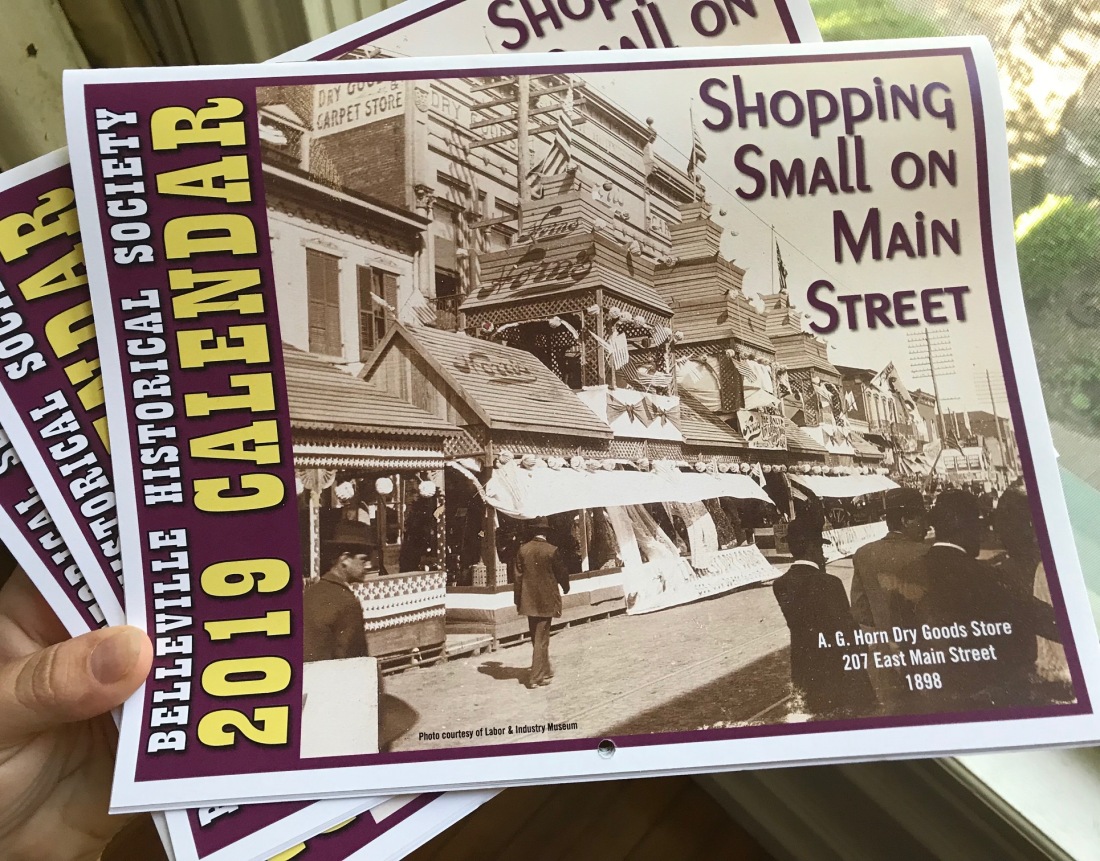 We will also have some for sale this weekend at Garfield Saloon, home to the Bellevile Historical Society. On Saturday, Sept. 15, there will be a community tag sale filled with vintage and antique items (and calendars!) followed by the 7th annual Plein Air Art Auction. Local artists are painting historic sites around town and will then auction their paintings at 1:00. It’s a great fundraiser for our organization and I’m excited to be a part of it all.

Lots going on in Beautiful Belleville! Hopefully we’ll see you this weekend at Garfield Saloon!